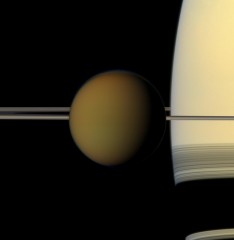 The colorful globe of Saturn’s largest moon, Titan, passes in front of the planet and its rings in this true color snapshot from NASA’s Cassini spacecraft.

Saturn’s moon Titan turns out to be flatter than it should be. Two Cassini scientists have a new and unusual theory about what causes Titan to have the shape it has: weather.

The moon hits your eye like a big round pizza pie…but most heavenly bodies are actually a bit squashed by rotation, with Saturn the most notable example. Titan’s flattening is also notable because there’s too much of it. The moon’s rotation should cause Titan’s diameter at the equator to be 1,345 feet (410 meters) longer than the pole-to-pole diameter. But the equatorial diameter is a whopping 2,231 feet (680 meters) larger. What’s causing that additional 886 feet (270 meters) of flattening?

A study from 2009 suggested Titan’s shape might have been formed when the moon was spinning faster. Depending on Titan’s internal structure, Titan would have needed to spin from 15 to 30 percent faster in the past. Other researchers proposed in 2010 that Titan’s icy shell varies in thickness, depending on the latitude.

One new and unique theory proposed by Mathieu Choukroun and Christophe Sotin of NASA’s Jet Propulsion Laboratory, Pasadena, Calif., is that Titan’s weather is dramatically changing the global shape of the moon. Their recent paper, which is based on the analysis of data from NASA’s Cassini spacecraft, argues that rain composed of the hydrocarbon ethane seeps into Titan’s crust, displacing the hydrocarbon methane and altering the crust’s density near the moon’s poles.

Scientists are interested in studying the exact shapes of planets and moons because the shape of a body might tell us something about the body’s history. For example, maybe a too-flat moon spun faster in the past; maybe a moon’s irregular shape indicates it was once an asteroid captured by a planet. Alternatively, the shape may be due to the structure within the planet or moon, such as a crust that varies in thickness.

The new paper studies the processes that shape Titan’s atmosphere and surface as a way to answer why Titan looks the way it does. Like Earth, Titan has a “hydrological” cycle. The difference, however, is that Titan’s involves the evaporation and raining down of hydrocarbons rather than water. Titan’s atmosphere contains large amounts of methane, and far smaller amounts of ethane. Global circulation models for Titan predict that ethane rain falls on Titan’s poles during the winters. Cassini’s observations of a polar hood over the north pole support this idea. The ethane rain would then flow and form lakes. We do see lakes at high latitudes, which fits with the model. Better yet, Cassini’s visual and infrared mapping spectrometer instrument detected ethane in Ontario Lacus, a lake near Titan’s south pole. The problem is that models predicted that far more ethane must have rained down on Titan. Where is the missing ethane?

Choukroun and Sotin theorize that the ethane has ended up in Titan’s subsurface, where it replaced methane within the crust. They base their idea on lab experiments showing that methane readily allows itself to be swapped out of so-called clathrates (essentially molecular cages surrounding the methane) for ethane. If the ethane rain seeped into Titan’s crust, a similar process could take place, freeing methane and locking up ethane. The lab experiments were at temperatures far warmer than what’s found on Titan, and don’t account for clathrates jammed together much more densely than in the lab environment. However, Titan’s relatively porous subsurface should allow the ethane-for-methane swap to take place rapidly enough for geologic purposes.

Ethane is more massive than methane, so swapping out the methane for ethane in the crust increases the crust’s density. That could cause the ethane-laden crust in the polar regions to subside relative to crust closer to Titan’s equatorial regions. And voilà, Titan gets more flattened! If all of Titan’s additional not-explainable-by-rotation flattening is caused by this process, the ethane-for-methane substitution would need to reach down below Titan’s surface 9,500 feet (2,900 meters), plus or minus 4,300 feet (1,300 meters). The process depends on the reach of polar rainfall. If it’s concentrated at the poles, then it would be easier to get the required amount of compression with less ethane over less time. Alternatively, loading up the porous crust with liquid hydrocarbons could cause more of Titan’s surface to subside or collapse. 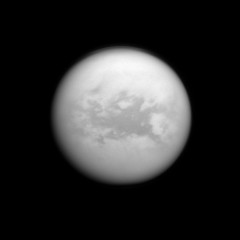 The Cassini spacecraft peers down through the hazy atmosphere of Saturn’s moon Titan to view the dark region called Belet. This view looks toward the trailing hemisphere of Titan.

Scientists can estimate about how long it would take for this mechanism to flatten Titan to its current shape. Titan’s ethane is formed in the atmosphere at a known rate. If this rate was more or less constant over Titan’s history, then it took 300 million to 1.2 billion years to create enough ethane to make Titan’s poles sink. This surface “age” is consistent with many observations, such as the cratering seen on Titan’s surface and the age of atmospheric methane derived from observing the prevalence of different isotopes. All in all, Choukroun and Sotin’s story of how Titan has evolved is consistent with what is seen today with Cassini.

This subsidence process isn’t unique to Titan. A similar process is seen on Earth in two different environments. In sedimentary basins, silt settles out from liquid water, forming new rocks that load the crust underneath the basins and make it sink. And, new crust formed underneath Earth’s oceans becomes more and more dense as it cools down, while spreading away from the mid-oceanic ridges where it was created. The additional weight makes the ocean bottom sink under its own weight (and that of additional sediments).

Choukroun and Sotin’s model would also provide an additional source of methane for Titan’s atmosphere, though not enough to be the sole source. More methane might come from cryovolcanoes releasing methane, or impacts with the surface releasing methane from Titan’s interior. Observing Titan’s surface for these kinds of features during future Cassini flybys is needed to set better limits on these models. Cassini data on the extent of rainfall and shape models of higher accuracy would also be helpful.

There are two other bodies (besides Earth) where the observed flattening has been used to study interior structure and thermal evolution. The minor planet Ceres’s flattening could mean that Ceres has an interior ocean, as described in a 2005 paper, and the shape of Saturn’s moon Iapetus might have frozen into its current shape when it was spinning faster. It’s fascinating to consider that the shape of a moon or planet could also tell us something about its weather. Choukroun and Sotin’s work shows that there may be another body, besides Earth, Venus, and Mars, where atmosphere-surface interactions have detectable and large-scale implications. This is a completely new process for icy satellites, and is due to Titan’s unique, dense, and chemistry-rich atmosphere. This kind of process can only happen on places with a significant atmosphere with active chemistry.