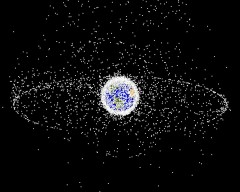 The orbit of the ISS, corrected with the engines of the Progress M-16M cargo spacecraft docked to the station, was raised by 0.5 km to a range from 408.4 km in perigee to 429 km in apogee, in order to stagger the defunct U.S. satellite Iridium-33.

According to experts’ calculations, the remnants of Iridium-33, which circle the Earth on various unstable orbits, could approach the ISS six times on Thursday.

The first-ever collision of two spacecraft resulted in a cloud consisted of several hundred tiny parts of both satellites orbiting the Earth on unstable orbits ranging between 500 and 1,300 km from the ground.