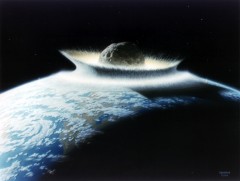 Illustration of an asteroid impact with the Earth

“There are three large asteroids, including Apophis, whose orbits cross the Earth’s orbit and which could hit the Earth in the next several decades,” Vitaly Lopota told the state newspaper Rossiyskaya Gazeta.

To change the orbit of a small planet of Apophis’ size, a 70-ton rocket was needed to “tow” an asteroid away from Earth or to destroy it with a thermonuclear blast, Lopota said.

Apophis was discovered in 2004. It will approach the Earth dangerously close, at about 30,000 km, which is less than one-tenth of the Moon’s distance from Earth, in 2029.

Experts calculate impact of a collision between Apophis and the Earth will be equal to a 1,700-Megaton explosion.

Lopota said existing Russian rocket carriers with RD-171 engines could be redesigned to produce a rocket capable of destroying an asteroid. Energia was ready to build such a rocket within three to five years, he said.

Currently, RD-171 engines made by NPO Energomash have been used on Zenit-3SL missiles employed in the Russia-Ukraine-Norway-U.S. joint project Sea Launch.

“We call them Tsar Engines, which no other country possesses,” Lopota said, referring to Russian artifacts, the Tsar Cannon and Tsar Bell, which were the world’s largest in their time.