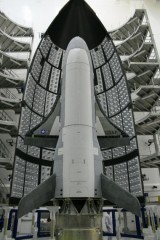 The U.S. Air Force has not released any details of what may be on board the vehicle or what its mission may be. United Launch Alliance provided a webcast of the launch, but the broadcast was ended “at the request of our customer (the Air Force),” when the space plane successfully reached orbit.

The X-37B is launched like a satellite and rides inside the fairing of the Atlas rocket. The X-37B can operate at in low Earth orbit for extended periods of time – the previous mission stayed in orbit for 469 days – and can re-enter Earth’s atmosphere and land on autopilot, landing just like a plane on a runway at Vandenberg Air Force Base in California.

While looking much like the space shuttle, the X-37B is about 1/4 the size of NASA’s space shuttle’s and is built using composites lighter than aluminum, and it uses a new type of leading wing tiles, called Tough Rock, instead of the shuttle’s carbon-carbon tiles. It runs on solar power allowing for longer missions.

The plane itself is not so secretive – the Air Force has released images of it while it is on the ground – but its mission and payload are what are kept confidential. The mission could be Earth observation, surveillance or spying, or perhaps deploying a satellite.

The launch was delayed several times so that ULA could investigate a glitch during a launch back in October.

“We had a little bit of concern with our upper stage engine, so we wanted to do some investigation and look into what was going on with that engine prior to (launch of the Orbital Test Vehicle),” said Jessica Rye, a ULA spokesperson.

In past missions, satellite watchers and amateur astronomers have kept tabs on the X-37B’s orbital whereabouts, and thanks to them, we expect to be able to provide small details about the space plane’s mission in the coming months.