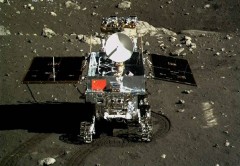 Yutu rover emblazoned with Chinese Flag as seen by the Chang’e 3 lander on the moon on Dec. 15, 2013 (China Space)

China scored a stunning, history making success with the successful touchdown of the ambitious Chang’e-3 probe with the ‘Yutu’ rover on the surface of the Moon today, Dec. 14, on the country’s first ever attempt to conduct a landing on an extraterrestrial body.

The dramatic Chang’e-3 soft landing on the lava filled plains of the Bay of Rainbows occurred at about 8:11 am EST, 9:11 p.m. Beijing local time, 1311 GMT today.
The monumental feat is the first landing on the Moon by any entity in nearly four decades. It was broadcast live on CCTV, China’s state run television network.

A tidal wave of high fives was unleashed by the huge teams of Chinese space engineers teams controlling the flight from the Beijing Aerospace Control Center (BACC).
There was also a huge sense of relief from the nail biting tension upon confirmation of the successful soft landing following many years of hard work and intense planning.

The Chang’e-3 mission entails the first soft landing on the Moon by anyone since the Soviet Union’s unmanned Luna 24 sample return vehicle touched down back in 1976.

China now joins an elite club of three, including the United States, who have mastered the critical technology required to successfully touch down on Earth’s nearest neighbor.

In one of its first acts from the surface, the landers life giving solar panels were deployed as planned within minutes of touchdown
The Chang’e-3 mission is comprised of China’s ‘Yutu’ lunar lander riding piggyback atop a much larger four legged landing vehicle.

China’s first ever lunar rover rolled majestically onto the Moon’s soil on Sunday, Dec. 15, barely seven hours after the Chang’e-3 mothership touched down atop the lava filled plains of the Bay of Rainbows.