The dark spots are called “lenticulae,” the Latin term for freckles. Their similar sizes and spacing suggest that Europa’s icy shell may be churning away like a lava lamp, with warmer ice moving upward from the bottom of the ice shell while colder ice near the surface sinks downward. 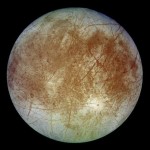 Other evidence has shown that Europa likely has a deep melted ocean under its icy shell. Ruddy ice erupting onto the surface to form the lenticulae may hold clues to the composition of the ocean and to whether it could support life.