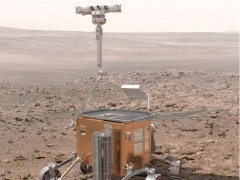 After NASA was forced to back out of the joint ExoMars mission with the European Space Agency due to budget constraints, it looked like the exciting rover-orbiter mission might not happen. However, ESA went elsewhere looking for help, and has now announced a tentative cooperative arrangement with Russia’s space agency where Roscosmos will provide the two launch vehicles for multi-vehicle European-Russian ExoMars missions in 2016 and 2018.

Plans are for the mission to have an orbiter for launch in 2016, plus an ESA-built rover mission in 2018. Roscosmos will provide Proton rockets for the launches of the two missions, as well as providing an instrument for both the orbiter and the rover as well as overseeing the landing of the rover. The orbiter would study Mars’ atmosphere and surface and the six-wheeled vehicle would look for signs of past or present life.
The orbiter would also provide telecommunications for the rover.
Frederic Nordland, ESA’s director of international relations, said the agreement would be finalized before the end of the year and that its principal characteristics are already known and accepted by both sides. The announcement was made at a meeting in Naples, Italy this week of ESA’s space leaders from the 10 different nations that comprise the organization. The leaders are discussing future objectives and priorities for Europe in space, with the aim of shaping the development of Europe’s space capability.
During the meeting, Poland officially joined ESA, becoming the 20th member of the European space organization. It joins the other member states of Austria, Belgium, Britain, the Czech Republic, Denmark, Finland, France, Germany, Greece, Ireland, Italy, Luxembourg, The Netherlands, Norway, Portugal, Romania, Spain, Sweden and Switzerland.

ExoMars is now expected to cost ESA about 1.2 billion euros. So far, 850 million euros has been committed by the participating members, but officials remain confident the remaining funds can be raised.
ESA officials also said Russia’s Proton rocket might be used to launch Europe’s Juice mission to Jupiter in 2022, saving ESA’s science program some 170 million euros.