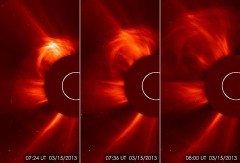 The ESA and NASA Solar Heliospheric Observatory (SOHO) captured these images of the sun spitting out a coronal mass ejection (CME) on March 15, 2013, from 3:24 to 4:00 a.m. EDT. This type of image is known as a coronagraph, since a disk is placed over the sun to better see the dimmer atmosphere around it, called the corona. (NASA/ESA)

On March 15, 2013, at 2:54 a.m. EDT, the sun erupted with an Earth-directed coronal mass ejection (CME), a solar phenomenon that can send billions of tons of solar particles into space and can reach Earth one to three days later and affect electronic systems in satellites and on the ground. Experimental NASA research models, based on observations from the Solar Terrestrial Relations Observatory (STEREO) and ESA/NASA’s Solar and Heliospheric Observatory, show that the CME left the sun at speeds of around 900 miles per second, which is a fairly fast speed for CMEs. Historically, CMEs at this speed have caused mild to moderate effects at Earth.

The NASA research models also show that the CME may pass by the Spitzer and Messenger spacecraft. NASA has notified their mission operators. There is, however, only minor particle radiation associated with this event, which is what would normally concern operators of interplanetary spacecraft since the particles can trip on board computer electronics.

Not to be confused with a solar flare, a CME is a solar phenomenon that can send solar particles into space and reach Earth one to three days later. Earth-directed CMEs can cause a space weather phenomenon called a geomagnetic storm, which occurs when they connect with the outside of the Earth’s magnetic envelope, the magnetosphere, for an extended period of time. In the past, geomagnetic storms caused by CMEs such as this one have usually been of mild to medium strength.