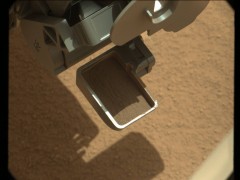 The minerals were identified in the first sample of Martian soil ingested recently by the rover. Curiosity used its Chemistry and Mineralogy instrument (CheMin) to obtain the results, which are filling gaps and adding confidence to earlier estimates of the mineralogical makeup of the dust and fine soil widespread on the Red Planet.

The specific sample for CheMin’s first analysis was soil Curiosity scooped up at a patch of dust and sand that the team named Rocknest. The sample was processed through a sieve to exclude particles larger than 0.006 inch (150 micrometers), roughly the width of a human hair. The sample has at least two components: dust distributed globally in dust storms and fine sand originating more locally. The soil material CheMin has analyzed is representative of modern processes on Mars. 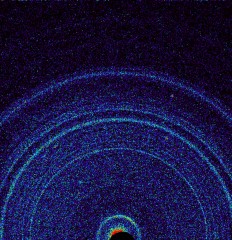 First X-ray View of Martian Soil
The soil sample, taken from a wind-blown deposit within Gale Crater, where the rover landed, is similar to volcanic soils in Hawaii.

“Much of Mars is covered with dust, and we had an incomplete understanding of its mineralogy,” said David Bish, CheMin co-investigator with Indiana University in Bloomington. “We now know it is mineralogically similar to basaltic material, with significant amounts of feldspar, pyroxene and olivine, which was not unexpected. Roughly half the soil is non-crystalline material, such as volcanic glass or products from weathering of the glass.”