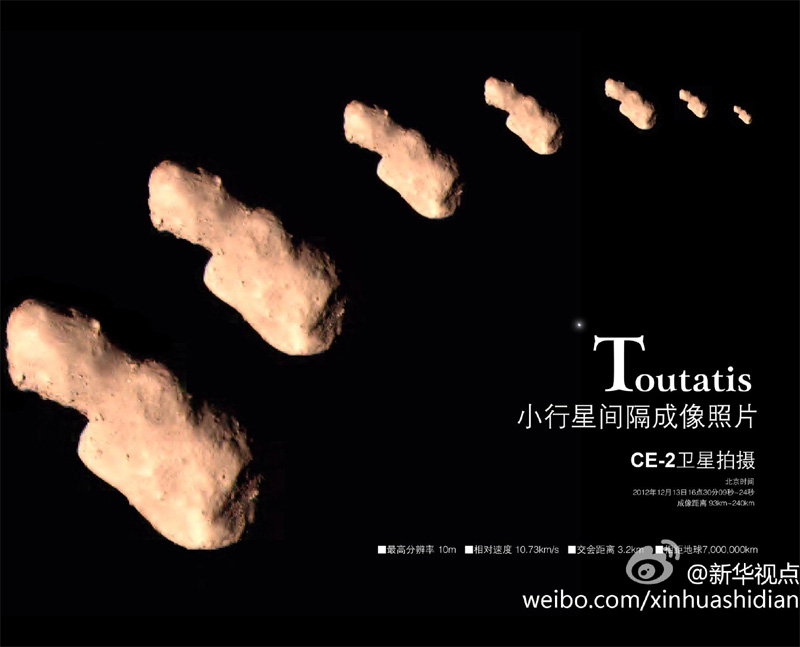 The Chinese lunar orbiter Chang’e 2 has completed its flyby of asteroid Toutatis, a five-kilometer (three mile) long space rock that recently had a “close” encounter with Earth.

The probe, which completed its primary moon-mapping mission in 2011, was commanded to depart lunar orbit in June 2011 and travel to the Earth-sun L2 point — a region of gravitational stability, approximately 1.5 million kilometers away in the opposite direction of the sun.

This extended mission set it up for the Dec. 13 flyby of asteroid 4179 Toutatis after it was commanded to leave the L2 point earlier this year.

According to Chinese state-run Xinhua news agency, the probe made a close approach of only 3.2 kilometers from the potato-shaped asteroid, traveling at a speed of 10.73 kilometers per second relative to the asteroid. The series of images above depict the asteroid when the probe was between 93-240 kilometers away.

“Sources with the (State Administration of Science, Technology and Industry for National Defense) told Xinhua that Chang’e-2 is continuing its deep space travel and will reach a distance of more than 10 million km away from Earth in January next year,” says the Xinhua news report.

China is the fourth space agency to make an asteroid close-encounter after NASA, ESA and JAXA.

After the news was broken via UnmannedSpaceflight.com, Planetary Society writer Emily Lakdawalla reported on the Chang’e 2 observations, saying: “The images are much better than I expected them to be. There are also many more of them than I expected. I look forward to learning more about how they were acquired!”

Information is limited so far, but it seems the already successful Chang’e 2 mission has been topped with a stunning asteroid flyby, completing its amazing run of science with a series asteroid observations.